It’s great when passionate pro-lifers get excited about political races. It’s fun to enthusiastically support a candidate who could make a positive DIFFERENCE! 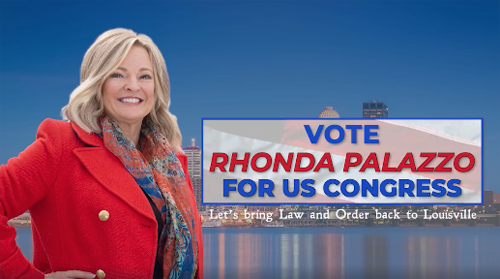 Rhonda Palazzo is the one to watch in the Third U.S. Congressional District which comprises most of Jefferson County. She will face John Yarmuth who has held office since 2007.

Yarmuth is supported by Planned Parenthood and solidly votes pro-abortion, against conscience rights, and for Democratic bills. See his voting record here.

Mr. Yarmuth’s net worth has risen massively over his years in Congress so donating his congressional salary may not be so generous. His family’s business, Almost Family, merged with LHC Group in 2018, a corporation worth $6.35B in 2020 and a recipient of $87.5M from the CARES Act. LHC is recommended on the NASDAQ as a Buy this month, because it is “well poised for growth on the back of a broad range of services… The stock has gained 75.9% compared with the industry’s growth of 18.8% in a year’s time.” Well, the rich do get richer.

Without a doubt Mr. Yarmuth will outspend Rhonda in the General Election. However, she does not believe that money will be the deciding factor for the Third District. She spent $7,092 to win by 130 votes in the Primary against Mike Craven, who spent very much more.

In an interview on YouTube she notes that Michael Bloomberg spent nearly a billion dollars on his three-month presidential campaign but that did not help. Likewise, Republican Vickie Glisson spent $744K to win against Yarmuth in 2018, which was hundreds of thousands more than Harold Bratcher spent in 2016 to unseat him, but Glisson got fewer votes than Bratcher.

“It’s about people, reaching out to people,” says Rhonda. She is seeking an opportunity to prove herself to all the people of the District.

Rhonda is a strong supporter of President Trump, and in particular favors his plan to build a wall on the southern border. She notes that a large reason he wants the wall is to put an end to sex trafficking of children and women. “Over 66,000 children go missing each month in the USA, many who are trafficked across the border.”

Rhonda is endorsed in the KRLA General Election PAC Alert. Learn more about her platform on her website.

She will be a featured speaker at the 2020 Annual Meeting of Louisville Right to Life on October 5th. All members are invited, but please call the office, 502.895.5959 to RSVP so we can plan for COVID safety.