Yesterday, Monday, March 23, Gov. Beshear's COVID19 bulletin noted that that all elective medical procedures had been mandated to cease.

Today, we know from sidewalk counselors and the EMW website, that EMW is performing elective abortions. In fact they exclaim on their site that they are “OPEN and seeing patients!”

The Kentucky General Assembly is not meeting today. It is stated on Twitter that they will convene this Thursday, March 26. Will they? We urge pro-lifers to contact your legislators about passing pro-life bills, as requested in previous posts, and to ask that ALL elective surgeries be stopped immediately.

KRLA is at work to beg for mercy for the unborn. Board President Diana Maldonado has sent an open letter to Gov. Beshear, shown below, and other efforts are being made. 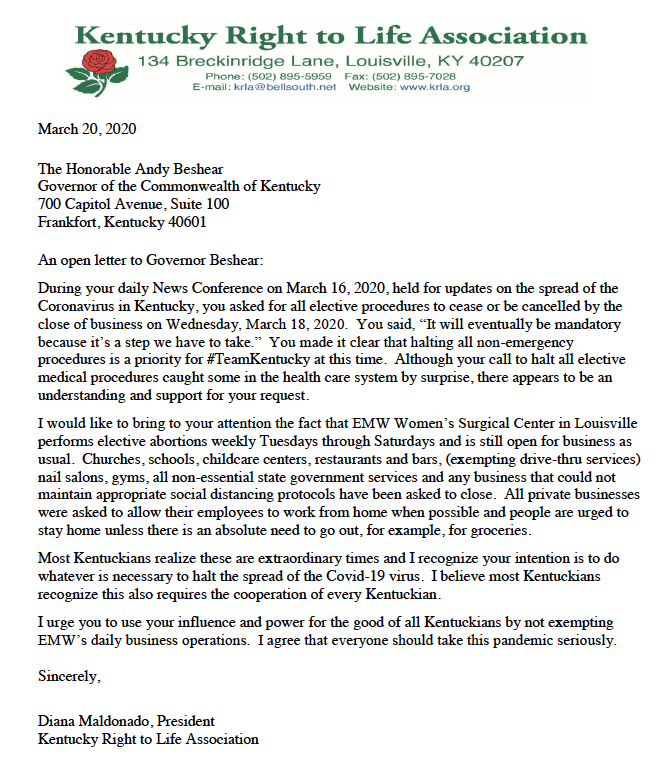 NRLC is also on the job, calling for legislators to enforce their mandate that elective surgeries be re-scheduled:

In response to the COVID-19 virus pandemic, hospitals and other primary care facilities are rightly focused on this medical emergency. Federal and state governments have called for all elective surgeries to be rescheduled in order to ensure care for those in immediate need and to free up vital resources to treat those impacted by COVID-19.

The abortion industry is ignoring this call and instead is working to ensure there is no interruption in the destruction of unborn babies.

What is going on at Planned Parenthood in Louisville? Though we know that it was illegal to issue PP a license to operate as an abortion clinic, we realize that abortions might take place anyway.

EMW states on their website that they are “the ONLY licensed abortion clinic in Kentucky.” But they have no valid license, unless they have obtained a Transfer Agreement of which we are not aware. Their claim, however, tends to indict PP— the pot calling the kettle ‘black’? It is true, however, that the EMW has judicial permission to operate. See this post.

But they do not have Gov. Beshear’s permission. See image below. Who is in charge? 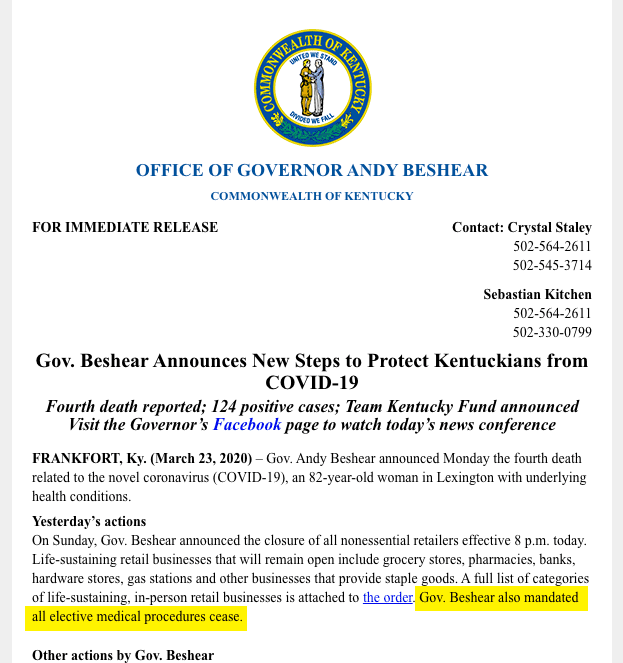