Website forms and data entry except PayPal closed for maintenance.

Celebration of Life Banquet is ON!

SEE the RAFFLE and SILENT AUCTION listings! In addition, there will be four $500 cash raffles. Raffle tix are $10 each for the money and gift cards. CLICK for MEDIA RELEASE for news organizations.

Attention All Right to Lifers! 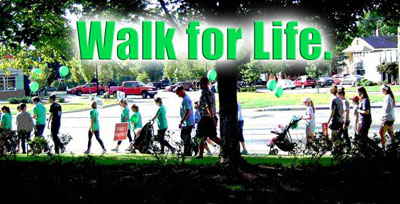 We are collecting e-mail addresses and taking a survey for our fall Walk For Life in Louisville. Especially during the coronavirus pandemic, we want to make sure people feel safe planning for a walk this fall.

We believe we can and should hold a Walk For Life this fall. We just want to make sure fellow pro-lifers will show up! Fill out the survey. Thanks!

A study just published in the Green Journal (Journal of the American College of OB/GYN’s) was terminated early due to supposed safety concerns. This study was aimed at examining the efficacy and safety of a now well used protocol for abortion pill rescue (or APR). APR provides the possibility to save the unborn child if women change their mind after taking the first medication (mifepristone) of two that are involved with a medication abortion. After having three patients enrolled in the study require ambulance transfer — two of whom required emergency surgery with one also requiring a transfusion — the authors stopped the study due to “safety concerns”. However, a more thorough review of their data tells a different story.

First, what they fail to emphasize is the difference in the women who required transfer. Two out of the three patients were from the placebo group – not the group that received progesterone (the APR group)

In Kentucky, most new laws take effect 90 days after the adjournment of the legislative session. Thursday, June 27, was the big day for 2019.

Of four new pro-life statutes, the Heartbeat and Anti-Eugenics laws were immediately blocked by ACLU legal challenges. HB 148 requiring that abortion end if and when Roe v. Wade is overturned, cannot yet be implemented.

Only one law was enacted on June 27, SB 50, and it got royal treatment in the C-J— The top headline across the cover page in the print version shouted: Abortion ‘reversal’ law is in effect.

This law requires a report of dispensing a prescription for Abortion Pills to the Vital Statistics branch within 15 days after the end of the month and an annual report with comparative data for other years. There are penalties for any provider failing to report or for submitting an incomplete report. Read more on page 2 of this pdf.

Additionally, the new section to our statutes requires abortion providers to tell patients that the process begun by the abortion pill may be reversed with a different medication.

The C-J stated that abortion providers already are required to report all abortions to the state Vital Statistics Branch. However, by specifying disclosure of prescriptions, there can be no doubt how many abortion were performed by surgery in an institution and how many were done at home by chemicals. (The abortion pill is approved by the FDAfor use to terminate a pregnancy during the first 10 weeks after the last menstrual period.)

Perhaps we will discover that many more abortions occur in Kentucky than have been reported. Is the figure actually around 3,000/year or really much higher?

The C-J stated that the Abortion Pill Reversal (APR) claim was disputed by the medical establishment. It quoted Dr. Nicole Nolan, an OB/Gyn at UofL Medical Center who testified against SB 50, and quoted spokespeople for the ACLU and Planned Parenthood who bragged that medical associations agree with them that APR is not supported by science.

How sad that many medical associations including the AMA line up with abortion providers.

The C-J did not quote any pro-life physicians who have successfully administered the Abortion Reversal Pills, nor any spokesperson for the American Association of Prolife OB/GYNS (AAPLOG). Nor were the views of KRLA or Kentucky Doctors for Life solicited.

Had their article been unbiased, it would have referenced a case series on the U.S. National Library of Medicine National Institutes of Health website that details 754 patients who attempted to reverse the medical abortion process, which demonstrated:

Intramuscular progesterone and high dose oral progesterone were the most effective with reversal rates of 64% (P < 0.001) and 68% (P < 0.001), respectively. There was no apparent increased risk of birth defects. Conclusions: The reversal of the effects of mifepristone using progesterone is safe and effective.

A “bonafide” clinical trial, very scientific, is in the works. Read here. This study will take 40 women who want a surgical abortion, give them the initial abortion pill and then either a placebo or progesterone; then check after two weeks which fetuses are still alive, after which they will have a surgical abortion. The PLACEBO COMPARISON is required by our medical establishment for their seal of approval on a clinical trial.

Is that really as convincing as the case series of 754 that showed which medication saved the most lives?

IMPORTANT: The new Section being added to our Ky. statutes ALSO REQUIRES THE REPORT TO REVEAL WHETHER ANY ABORTION COMPLICATION OCCURRED:

Abortion complications to be reported shall include only the following physical or psychological conditions arising from the induction or performance of an abortion:

If any female considering a “safe, legal” abortion sees this list of potential complications, it may serve to dissuade her.

Kentucky law has many good restrictions on abortion for the emotional and physical health of the mother. These are restated in SB 50 (see pdf), to note where current law needs to reflect a change. Unfortunately providers can get around these in various ways. Nevertheless, Kentucky pro-lifers are making progress. Hats off to Sen. Robby Mills (R), Henderson, who sponsored the bill.

For any women who desire more information and immediate help, see the Abortion Pill Reversal website.

The four bills that were introduced by Kentucky’s Pro-life Caucus on January 10 ALL passed the current legislative session. We know our Governor will sign them all!

SB 227, introduced on Feb. 15 to protect Born Alive Infants, did not make it to the finish line. We hope this bill will be re-introduced next year.

How does it feel to live in a pro-life state? Wonderful! What relief we pro-lifers feel (!), knowing that the majority of our legislators have the deepest concern for pre-born babies. Perhaps there are many things in your community and state that you would like to see changed, but at least we do have respect for life. The majority of us are holding firm that our U.S. Constitution means what it says about our Right to Life.

The bills, SB 9, the “heartbeat bill”; SB 50, abortion pill reporting requirements AND the doctor must explain the Abortion Pill Reversal Pill to the client; HB 5, no abortion for discriminatory reasons based on sex, race, color, national origin or disability; and HB 148, to end abortion if and when Roe v. Wade is overturned by SCOTUS— ALL had bipartisan support. That is further proof that Kentucky is, in the main, PRO-LIFE.

Will Kentucky be the first state NOT to have an abortion clinic? There is national speculation about that. With the ACLU challenges to our pro-life laws and bills not yet signed into law, we can’t say.

We can’t rest on our laurels but we can enjoy the moment. Today, we are passionately grateful and taking the day off. (But we are in the office!)

Enjoy the full testimony of Abby Johnson at the Public Protection Committee hearing.

SB 50 to require reporting of Abortion Pills prescribed and for the Dr. to inform the patient that the Abortion Pill can be REVERSED— was scheduled for passage in the House on Feb. 25, but … new amendments were introduced by Rep. Mary Lou Marzian. After all, it's just a joke, isn't it?

House Floor Amendment 2 - Establish a new section of KRS Chapter 213 to require a report of when a prescription is issued for any medication used to treat erectile dysfunction and any reported side effects to the Vital Statistics Branch within 15 days after the end of the month in which the prescription was issued.

House Floor Amendment 3 - Establish language to specify that all members of the General Assembly shall be responsible to pay specified court costs and fees related to certain abortion litigation.

Rep. Marzian also slowed the passage of HB 5 with an amendment:

An unborn child residing in the Commonwealth shall have all constitutional rights and responsibilities as a citizen in the Commonwealth including but not limited to the right to public education, to pay taxes, to receive social security, to free speech, to inherit, to a trial by jury, and to peaceful assembly.

SB 50, Abortion Pill Reporting Requirements— to report dispensing a prescription for RU-486 …or any other drug …intended to end a pregnancy to the Vital Statistics Branch within 15 days after the end of the month (see full text), has some good additions: