An article in the Feb. 2 C-J reports that PPINK (Planned Parenthood of Indiana and Kentucky) is joining forces with “its far larger and richer counterpart that serves the Pacific Northwest and Hawaii.” This is not a surprise.

About four years ago at a National RTL conference, Randall O’Bannon, NRLC Research Director, detailed the plans of PP to merge its operations little by little to become regional and showed pictures of large office buildings that would house its future operations.

According to C-J writer Andrew Wolfson,

The CEO of the combined alliance said it will have more money and legal muscle to fight “unrelenting attempts to undo constitutionally protected rights.”

The alliance will have a combined annual budget of as much as $90 million and serve 164,000 patients at 45 health centers in six states.

Chris Charbonneau, CEO of Planned Parenthood of the Great Northwest and the Hawaiian Islands (and now Planned Parenthood of Indiana and Kentucky), said the merger is part of a conscious effort of affiliates in blue states to help patients and organizations in states that are less hospitable to reproductive freedom.

Kentuckians, you dunnit. You elected a pro-life governor who took Louisville’s PP to court because it had no Transfer Agreements with local hospitals or ambulance service to protect the lives of aborted women in emergencies, as required by Kentucky law. The ACLU sued Ky on behalf of the EMW and PP clinics, and won, but our state is appealing the case. But PP cannot perform abortions, yet. 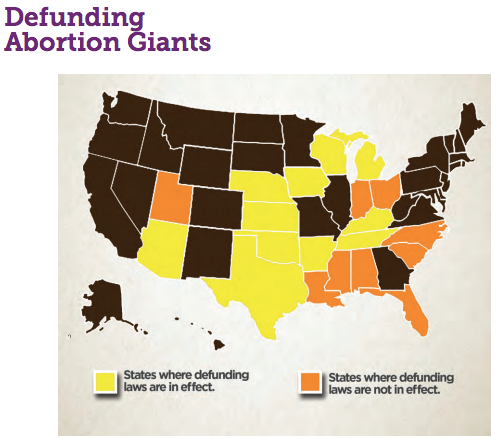 And other pro-life bills have been signed into law by our pro-life legislature that are currently in continuing litigation, including the Ultrasound and Dismemberment laws that would definitely hamper PP’s operation in Ky.

So, as Executive Director Margie Montgomery stated for the C-J article, “Planned Parenthood is running scared.”

That said, we must all be vigilant in this election year, and work hard to get the vote out for all pro-life candidates!