January 22 marks the anniversary of the Roe v. Wade Supreme Court decision that legalized abortion in the USA in 1973. The March for Life is the world's largest pro-life event.

JOIN US TO MEET your SENATORS and REPRESENTATIVES and MARCH FOR LIFE in Washington, DC. The next March will be January 29, 2021, the 48th anniversary year.

“The March for Life is one of the most important annual events in Washington D.C. Every year, thousands and thousands of Americans across all ages, faiths, and backgrounds travel here for this day. They come to remind our nation that human dignity and human rights must not exclude the most vulnerable among us.

“I welcome all of this year’s demonstrators, especially the hundreds of Kentuckians who made the trip this year, including my friend Margie Montgomery and Kentucky Right to Life. Thank you for coming. Your peaceful advocacy and moral courage are inspiring.

“I am grateful to President Trump for making history today. His historic decision to stand with you in person underscores his firm commitment to this fundamental issue.

“Because of the impeachment trial, the Senate cannot vote on pro-life legislation today to show our solidarity with you. But sadly, we know what the fate of such legislation would likely be. Even our most modest efforts to bring U.S. policy closer to the international mainstream have failed to overcome filibusters from Senate Democrats.

“Last year, 94% of Senate Democrats voted against something as straightforward as the Born-Alive Infant Protection Act. In 2018, 90% of Senate Democrats voted to block the Pain-Capable Unborn Child Protection Act and keep America one of just seven countries in the world — including China and North Korea — that permit elective abortion after 20 weeks.

“It wasn’t always this way. Less than 25 years ago, a leading Democrat like Sen. Daniel Patrick Moynihan could publicly oppose partial-birth abortion and admit it is ‘close to infanticide.’ But even as science and new technology continue to bolster the pro-life cause, the far left continues to move backwards into extremism.

“But we aren’t going to give up. Working together, we can change hearts and minds and continue to put lawmakers on the record. Washington needs your example and your advocacy more than ever. Thank you for your work.” 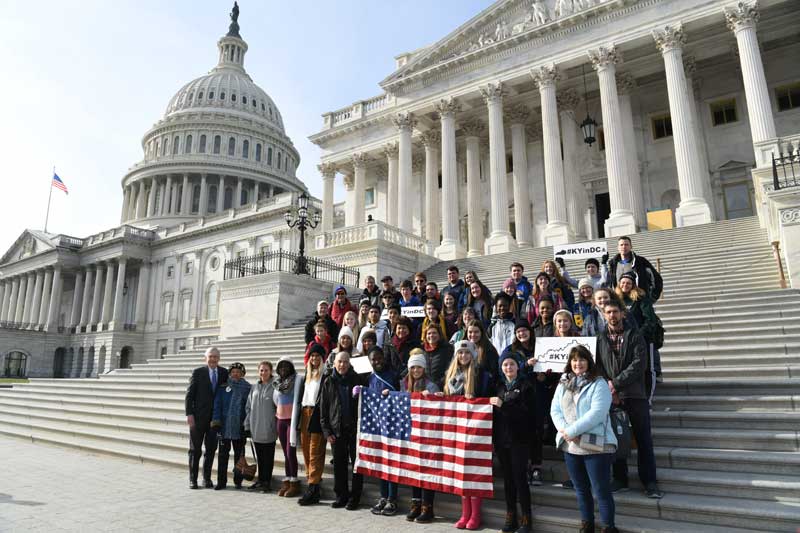 Kentuckians with Sen. McConnell before the 2020 March for Life.